Who Will Sing For Lena?

Who Will Sing For Lena?

"Who Will Sing For Lena" was accepted into the festival this year!

WHO WILL SING FOR LENA?

The captivating theatre performance, written by Janice Liddell, “Who Will Sing For Lena?”, is a look at the American dream deferred. Remember the hopes of your twenties, the yearning of your thirties, and the acceptance of your forties. Very few realize their dreams and make them reality. Lena Mae Baker is no different. Imagine watching your dreams roll by. So often people give in to reality and their lives take a completely different route. This play is about what hope can sometimes generate; complacency. Hoping things would get better, hoping someone will change, or hoping that the world will understand. This is a story of a woman who is just like our mothers, sisters, and wives.

The one-woman show is based on the true story of Lena Baker, a Black maid who was wrongfully convicted of the murder of her white employer, Ernest Knight. She was executed by the state of Georgia in 1945 in what was the first — and last — time the state government electrocuted a woman.

This show has already seen success in theaters around the country; from Boston, MA to Concord, NH, New York City, Torrington, CT, and up to Gettysburg, PA, with wonderful recognition:

WHO WILL SING FOR LENA? 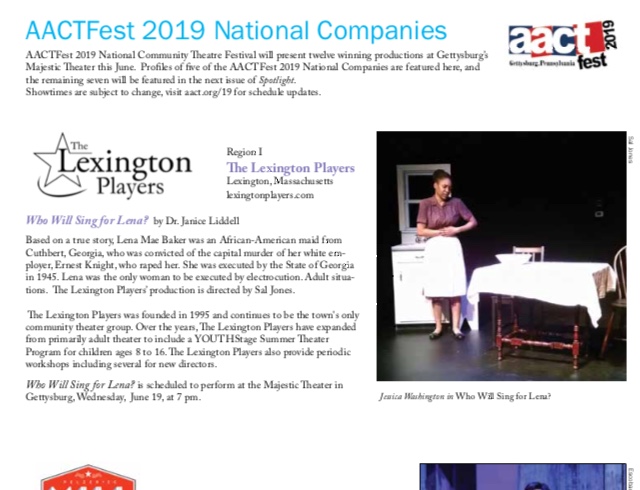 If you're interested in bringing Who Will Sing For Lena? to a theater near you, please contact us!